AirAsia just hit their 300 Million Guests Milestone! And to celebrate this feat, they’re offering fares on 3 million AirAsia seats up for grabs from as low as Php 300, all-in!

AirAsia reached another milestone yesterday with 300 million guests flown. The milestone was commemorated with a string of celebrations starting from Terminal 3, Soekarno-Hatta International Airport, to The Ritz-Carlton Jakarta, Pacific Place.

Jodie Lazuardie, a 30-year-old Art Director based in Jakarta was the lucky guest who booked the 300 millionth AirAsia seat. Jodie’s flight booking from Kuala Lumpur to Jakarta earned him a once-in-a-lifetime experience and a hefty 3 million BIG Points from AirAsia’s loyalty programme, also known as AirAsia BIG.

Upon landing in Jakarta, Jodie was treated to a Red Carpet experience which included a private pick up from the plane, fast-track immigration clearance and priority baggage handling, all the while being escorted by a group of AirAsia cabin crew.

Jodie was also driven from the airport to The Ritz-Carlton Jakarta, Pacific Place by a private chauffeur, where he was warmly welcomed by AirAsia Group’s management team.

Tony Fernandes and Alice Goh presented the 3 million BIG Points to Jodie, which can be used to redeem any flights within AirAsia’s extensive network. For instance, one return Jakarta – Singapore flight requires 13,000 points while Bali – Melbourne requires 60,000 points. The 3 million BIG Points will enable AirAsia’s 300-millionth guest to redeem hundreds of free flights to any AirAsia destination.

AirAsia reached its 100-millionth milestone in October 2010, and celebrated the 200-millionth mark three years later in September 2013. In a little less than two years, the number of guests flown across the group has grown to 300 million.

To celebrate the 300 million guests milestone, AirAsia Group announced celebratory fares on 3 million seats from as low as Php 300, all-in fare and one way.

Guests can fly to many exciting destinations across Asia and Australia, such as Singapore, Kuala Lumpur, Maldives, Manila, Hyderabad, Seoul, Osaka, Tokyo, Melbourne and Sydney.

The promo seats are now up for grabs online at www.airasia.com until August 16, 2015 for travel period from February 15, 2016 until August 31, 2016. The celebratory fares are also available on AirAsia mobile Application that can be downloaded via iPhone and Android, and mobile sites mobile.airasia.com. 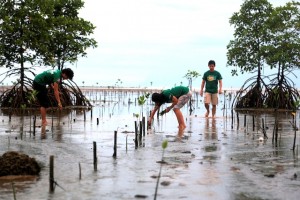 Previous post Travelling with a Purpose: a Cebu Pacific Juan for Fun Story