Five hours away from Manila is an arresting town in the province of Pangasinan called Rosales. It is home to an internationally renowned Filipino novelist Francisco Sionil Josè.

Rosales is an ideal stop over to many travelers as it serves as a crossroad to many neighboring towns. This place is also considered as a major economic powerhouse in Pangasinan after the opening of SM City Rosales. The town was named after Don Antonio Rosales.

Aside from being a favorite getaway of tourists because of its majestic views, you will also find here the story of two people with disabilities and how they faced the world despite of their conditions. They are just two of the 1,500 thousand PWDs in the Philippines.

These people have suffered from discrimination for a long time. But with the SM Cares program, these young men were given opportunities to live a normal life. SM Cares program gives attention to the ability of the PWDs by maximizing their potentials and recognizing their active role in the development of the community. SM Cares guaranteed their right to health, education, services and especially employment.

As defined at the Philippine Magna Carta for Disabled Persons, PWDs are “those who are suffering from restriction or different abilities, as a result of a mental, physical or sensory impairment, to perform an activity in the manner or within the range considered normal for a human being.”

34-year-old Lorben Carpo, from Barangay Carmen, is a father to 3 kids. People from the community call him “Pukol” a Pangasinense word which means the one side of the arms is missing. He was born with a short stature and undeveloped right hand. Because of his physical appearance and condition, he doesn’t have an easy access to the elements necessary to succeed in life, including employment. He worked as a “tupig” vendor and a farmer before he was hired at SM City Rosales as an elevator operator and now as maintenance personnel in the administration office.

Early this year, he flew to Thailand as the representative of SM to the convention about the involvement of PWDs to agri-business. Lorben was really thankful with the opportunity given to him by SM Cares. “Kahit ganito kami, binigyan kami ng pagkakataon,” he said.

Another employee of SM City Rosales with disability is Gregorio dela Osa, 40 years of age. He was born with hearing impairment and even could not talk, tagged as deaf-mute.

He was married to Marivic who is also a mute-deaf person. They were blessed with 2 kids. Greg is a construction worker before he was hired as a janitor in SM City Rosales.

The SM Cares program serves as the holistic and cohesive flagship for the many SM Supermalls CSR programs. Broadly speaking, the goal of the SM Cares program is to ensure that SM serves not only as the retail industry leader, but also acts as a catalyst towards positive change in our nation; leading by example when it comes to corporate social responsibility.

SM Cares program wants to expand these opportunities to other PWDs with the involvement of the local community. Through this program, SM City Rosales is reinventing the vacant lot located at the back of the mall into a productive farm where people with disabilities from their community can work as farmers. Hired PWDs will undergo workshops and seminars about agricultural development and farming.

Initially, the farm was planted with thousands of Papaya trees. The products produced are being sold directly in the supermarket, considering them as suppliers of fruits in the mall. The profit was given to them aside from the monthly income they are receiving. This project will help the PWDs to be productive and become less dependent on their family members and government aid.

* Story and photos by Noks Sosa of SiningFactory.com.

Indeed, it is heartwarming to know SM Cares advocates for the rights of PWDs. We hope to see more similar activities in other SM malls around the Philippines. 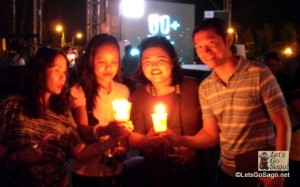