AirAsia was recently named the World’s Best Low Cost Carrier for the fifth consecutive year by Skytrax, and to celebrate, launched a ‘high-five’ themed campaign with the hashtag #Hi5AirAsia to collect as many ‘high-fives’ as possible from the public throughout the region. The high-fives were translated into the number of total promotional seats available for the campaign which started Monday, July 8, 2013.

Two million ‘high-fives’ were collected throughout Asia, and to thank all AirAsia guests for their overwhelming support towards the campaign, 2 million promotional seats will be available from a base fare of RM0.05 (exclusive of taxes & fees) to all of AirAsia’s route network.

All-in-fares inclusive of taxes and fees start from as low as RM26.05 (P 338.65) one way to domestic destinations such as Alor Setar, Langkawi, Penang, Kota Bharu, Kuching and more; while international destinations such as Singapore, Hatyai, Krabi, Surat Thani, Phnom Penh, Bangkok, Bandung, Siem Reap and many more are from RM49.05 (P 784.80) one way.

Guests that book flights with baggage will also be entitled to 2X BIG Points throughout the “2 Million Seats on Sale” campaign.

AirAsiaGo will also be offering 3D2N Flights + Hotel package deals from as low as RM129 to destinations such as Penang, Langkawi, Kota Kinabalu, Phnom Penh and many more. Guests can grab the deals at www.AirAsiaGo.com from 8th – 14th July 2013 for the same travel period from 10 Feb – 5 August 2014. Those who have booked their flights can complete their holidays with AirAsiaGo’s existing deals and enjoy up to 50% savings on hotel bookings.

Bookings can also be made via AirAsia’s mobile applications on iPhone, Android devices, Blackberry10, as well as its mobile site mobile.airasia.com. The mobile applications on iPhone and Android platforms are now updated with the ‘Manage My Booking’ feature as well, where guests can view all their bookings, check-in for flights, as well as manage add-ons such as meals, seat selection, check-in baggage and sports equipment allocation, purchase travel insurance and more.

Travel tip: Pre-book your check-in baggage allocation online along with your flight bookings and save up to 66% as compared to checking-in their bags over the airport counter. Happy flying with the AirAsia Two Million Promo Seats! 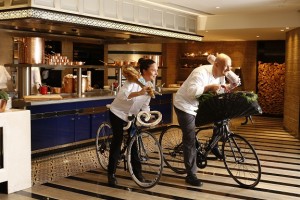