Traveling enriches the mind and opens-up opportunities to understand different cultures around the world. For many, checking countries off from their bucket list is a life-long dream. Fortunately, the developments in the travel and tourism industry has paved the way for loyalty programs to reward its members with travel miles in every purchase made.

One example and good news is the recent development between Solaire Resort and AirAsia who partnered together to further enhance the Solaire Rewards Program and make traveling within reach to more people.

Loyal Solaire Rewards members will be closer to their ideal destination when they reap travel rewards from the Status Points that they earn. Each Solaire Rewards Program card holder starts at the Silver Tier and moves up to Gold, Platinum, Emerald, Ruby and finally the Diamond upon earning the corresponding Status Points needed.

The AirAsia BIG Loyalty Program lets its members earn AirAsia BIG Points through every plane ticket bought, hotel bookings via travel partners and even on purchases from over 160 lifestyle merchant partners.

“AirAsia’s presence globally allows us to continue providing our guests with memorable experiences that go beyond our property. We are delighted that we can reward our loyal Solaire Rewards members with AirAsia exclusive privileges no matter where they are, and fully enjoy their dream destinations.” said Cyrus Sherafat, Solaire Resort’s Executive Vice-President for Casino Marketing.

Established in November 2011, the AirAsia BIG Loyalty program enables its members to enjoy the lowest flight fares across AirAsia’s extensive network. More than 18 million AirAsia BIG Loyalty Members can earn AirAsia BIG Points on AirAsia flights to over 130 destinations across Asia, Australia and New Zealand and the Middle East, participating hotels as well as retail, e-commerce, travel and lifestyle partners within the region.

“Solaire Resort & Casino offers their customers a multitude of activities and services to enjoy, from recreation and dining to entertainment and shopping. We are excited that we can now extend the privileges of AirAsia BIG Points that are just as valuable as cash to their customers, taking them further around the world easier, faster and better than ever,” shares AirAsia BIG Loyalty Chief Commercial Officer Victor Kaw.

Make every Solaire experience count and let your loyalty reward you with your big dream. Sign up for the Solaire Rewards and AirAsia BIG Loyalty with AirAsia Philippines online and start earning points to your next destination! 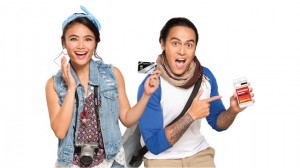