My first professional blog started with this travel blog back in 2008. I’m a little geeky as well, teaching IT at a local college and maintaining a gadget blog called Gadget Gambit. So imagine my excitement when Lenovo Philippines invited me to join the Lenovo Yoga Tablet 8  “18-hour Bloggers’ Metro Tour Challenge” a few weeks ago.

As a traveler and a blogger at the same time, I document my travels through photos while experiencing it. We almost always travel with our smartphones, tablets, and some even pack bulky DSLRs, among other travel gears. And since we sometimes go the distance where power are not always readily available, we rely on our ever-dependable powerbanks for that extra power juice to make our gadgets run.

So when the brand mentioned that their Lenovo Yoga Tablet 8 boasts of an 18-hour battery life, I was initially doubtful, but hopeful at the same time. Doubtful because the best tablet I ever had only provided a 10-hour battery life. I was also ‘hopeful‘ because deep within, I really wanted a gadget which lasts for 18-hours or more for travelers like us who gets frustrated in the middle of our journey when we run out of batteries. Imagine coming short of capturing great shots in the mountains or at the beach because your camera was drained; or missing the scenic sunset which doesn’t wait for a recharge.

And so it was. I took on the challenge and joined 2 other bloggers – Ferdz of Ironwulf.net and Eric of Byahilo.com in proving (or disproving) the Lenovo Yoga Tablet 8‘s 18-hour battery-life claim.

Our meeting started with a wine-appreciation talk over dinner at One-Way Street restaurant in Makati. Our official start-time clocked-in at 6pm. This was followed with Bartending 101 lessons at Prohibition Liquor Lounge at about 9pm where we created our own cocktail drinks.

We ended the day at One Greenbelt Hotel where we spent the night.

Knowing that our activity the next day would last until the evening (which would be at least 12 hours more), I turned off my Lenovo Yoga Tablet 8 at 12 midnight. After 6 hours, I had 65% battery life remaining.

I woke up 5 minutes before 7am the next day and turned on my Lenovo phablet.

We had breakfast at Banapple in Ayala Triangle which was followed by a tour of the Ayala Museum. It was my first time to have a tour inside Ayala Museum. What I thought to be most probably boring among all the activities in the tour turned out to be an eye-opener in the aspect of appreciating Philippine history.  The “Gold” exhibit focusing on Philippine archaeological gold and the culture surrounding it is not be missed.

We were then escorted to the nearby Makati Golf Club where Let’s Go Sago had another first – a golfing activity! More about this here.

The PowerPlant Mall in Rockwell was our 6th pit stop where we had a first-hand experience in making actual candies at “Made in Candy“! I never appreciated candies until I created one with manual labor. Thanks to the lessons from the owner and crew of Made in Candy.

Finally, we had lunch at Cali Burger in the new Century City Mall.

After the long and ‘energizer‘day, it was time to refresh and get some grooming. We visited Felipe and Sons in Makati for some late afternoon haircut and massage. It was a long-awaited relaxation treat!

Our second to the last pit stop was a restaurant called Tapeo Manila. The chef demonstrated how they prepare and cook their Gambas and shared a little trivia that the “foods” brought by ‘Vhong‘ to ‘Deniece‘ was from there right before he went to the condominium. 😛

With 3% indicated at the upper right corner of my tablet’s screen, we arrived at our final destination  – Chef Tatung – for an intimate and delicious dinner with the folks from Lenovo and Ardent PR agency.

My Lenovo Yoga Tablet 8 shut down by itself at about 7:20pm for a total of 18 hours and 10 minutes running time.

For the record, I was able to take 404 photos and five 1-minute videos within those 18 hours with the following photo breakdown:

As you can see, I was still trigger-happy in our first venue. 🙂 Photos were understandably not allowed in the Ayala Museum tour while I had my photos taken by Ardent folks at the golf club and in Made in Candy, hence the shooting spree. 🙂

In addition, the Yoga Tablet 8 was in active use with open Wi-Fi majority of the time within of the 18-hour duration. We were surfing and uploading photos real-time in our social networks such as Facebook, Twitter, and Instagram when we are not taking photos (in the van during transport).

In fact, my 18hours and 10 minutes result was the least among us three travel bloggers. Eric and Ferdz had theirs exceeding 20 hours since they did not turn their gadget’s off at One Greenbelt Hotel. They shared that they had the tablet on and downloading stuff from the Internet overnight while asleep. I think one of them got almost 24 hours.

Aside from the 18-hour battery life, another set of feature I admire from the Lenovo Yoga Tablet 8 and 10 is its ergonomic handle with built-in adjustable kick-stand and unique modes.

The cylindrical handle on the side can be in “hold mode” which is designed to fit an individual’s hand making it easier to hold whereas other tablets require two hands.

Rotating the side cylinder 90° converts the tablet in “stand mode“. This allows the tablet to stand by itself on a desk or table. Users can change the viewing angle to fit what’s comfortable for them from 110° to 135°.

Stand mode makes it easy for users to comfortably watch movies, place video calls and interact with the ten-finger touchscreen without having to rely on add-on accessories.

Third, simply laying the Yoga Tablet down offers the tilt mode where users can type directly on the tablet, play games, or surf the Internet with a better viewing angle.

Users can even customize the tablet’s auto-detection software that automatically brings up frequently used apps in hold and stand modes.

Personally, I like the “hold mode” best since travel bloggers move around a lot. It enables us to take photos on the spot and share what we captured online on the fly and conveniently with one hand on the cylindrical handle and the other on the tablet screen. 🙂

Interestingly, the cylindrical handle is also the battery. It packs dual batteries typically found in laptops. It can also act like a powerbank that can charge other devices such as smartphones via its USB on-the-go2. The 8-inch and 10-inch Yoga Tablets is equipped with a 6,000 mAh and 9,000 mAh batteries, respectively.

More from the Lenovo Yoga Tablets

Both the 10 inch and 8 inch models run on MT8389 Quad Core processors and feature Android 4.2. Also equipped with Dolby® audio, the Yoga Tablet’s front-facing speakers create a powerful surround sound experience through the device speakers and with headphones.

Both lightweight, the bigger one weighs in at 1.35 lbs while the 8-incher is only at 0.88 lbs. They feature high definition 1280 x 800 displays, a 5 MP auto focus rear camera plus an additional 1.6 MP front camera, 16G EMMC, and Bluetooth 4.0. The 8-in model has WCDMA with phone features, and  allows users to make calls and send SMS/MMS messages.

As a room for improvement however, I would love to get a better rear camera with higher megapixel count and shutter speed to match, and flash for low-light conditions. The novice mobile photographer in me is demanding like that. 😛 Although it might sound too much for a tablet at this time, I believe that is very possible in the near future.

Aside from the interactive challenge, we also got to take home the Lenovo Yoga Tablet 8 which we used. But with or without the tablet given away, I surely enjoyed the ‘reality’ challenge and truly appreciated the product.

Thanks to Lenovo as it indeed makes an ideal travel companion.  I get commendations until now when other people see me sporting the Yoga Tablet 8 in “hold mode“. 🙂 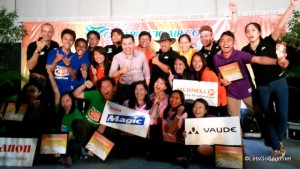 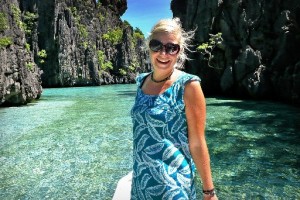