How big a 100 Million? A number “1” followed by eight zeros? I say aside from just being a number, these are 100 lives with 100 million stories. And just recently, Cebu Pacific reached that feat.

As CEB’s 100 millionth guest, Yelen received Php100,000 as well as 100 tickets to any domestic or international destination, during a special inflight announcement that took the place of the airline’s trademark Fun Games. The airline celebrated the milestone with the rest of the passengers on her flight, with each being given free round trip tickets to the domestic destination of their choice.

A warm reception greeted Yelen upon arriving in Manila. Cebu Pacific employees, some of whom have been with the airline since its inception, welcomed Yelen, the passenger who will now be forever part of the airline’s history. Manila-based Yelen shared, “I’ve been going back and forth to Cebu, where many of my relatives are based, since I was very young. For the past 16 years, I fly Cebu Pacific because their airfare is much more affordable than other airlines. With my ticket prize, I really want to visit more places in the Philippines, and visit my relatives more often. Being the 100 millionth passenger is my most memorable travel experience. This is really a blessing for me. It’s a great way to start the year,” she added.

Late last year, as Cebu Pacific got ready to reach its 100 millionth milestone, Cebu Pacific provided tickets to 13 Facebook friends, who nominated their loved ones they believed deserving of free flights. Their stories, ranging from a close sibling bond to a mother’s dream destination, were also featured on the Cebu Pacific Air Facebook page.

The airline also continues to share the different stories of the people one meets while traveling, via the Juan of a Kind Stories Facebook page. From the heartwarming to the humorous, each anecdote captures the similarities and differences of our cultures.

Cebu Pacific has grown into the Philippines’ largest airline with approximately 90 domestic and international routes, taking more people to farther shores and providing affordable air travel. It now operates the most extensive network within the Philippines, as well as between the Philippines to 28 international destinations, including Australia (Sydney), Brunei, Japan (Nagoya, Tokyo, Osaka), Kingdom of Saudi Arabia (Dammam, Riyadh), and the United Arab Emirates (Dubai).

CEB VP for Marketing and Distribution Candice Iyog related, “We started operations in 1996, at a time when air travel was expensive. It will always be a privilege for us to link islands and countries together, contribute to nation-building, and play a role in our passengers’ life stories.“

Check out the Cebu Pacific website www.cebupacificair.com for more information. 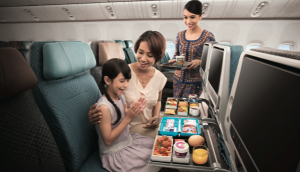