We woke up at 330 am to be at the Omni Aviation field by 5 am for the first day of the 18th Philippine International Hot Air Balloon Festival (2013). It’s good that my wife and I checked in at Metro Clark Hotel a day earlier to avoid the traffic jam from Manila.

The night seemed to be stretched as the morning light only started to penetrate the sky by 6am. The hot air balloon teams started to come in by then.

We went straight to the VIP area for closer shots and to get the best angles for photography purposes.

As invited bloggers, we were also able to focus on how the SM hot air balloon is setup from unfolding to the eventual release of the balloon in the air.

We were also able to catch the Axe Philippines Axe Apollo space shuttle  balloon as it was being prepared.

We got to meet and briefly talk with SM hot air balloon’s designated pilot from England – Mr. Nick Betin. He headed the team and instructed the staff on how to setup the balloon.

They started by tying a huge rope around the frame. This was then attached to a nearby truck which will serve to hold the balloon in place against untoward wind direction, if needed.

Next, the balloon was unfolded carefully in pattern according to how it will be inflated. This was followed by starting the external fan and burner flame to heat up the air going inside the balloon.

Here, your elementary science concept that “hot air goes up and cold air goes down” comes into play.

Once properly filled-up and ready. Riders were asked to come in one by one. Me and my wife was supposed to take a brief tethered flight. A tethered balloon ride means that the balloon is still tied to the ground (or at least the truck in our case) to prevent the balloon from flying all the way. However, we were advised that the strong winds prevented the possibility of a tethered flight so it’s the full riders’ turn.

Thanks to Mr. Nick Betin, everything went well and SM City Clark‘s hot air balloon were among the first ones which took off that morning. There were also a number of balloons which were not able to take fight due to the strong winds such as the ‘flower vase‘ /’bouquet‘ and the all-time favorite “sun“/”sunshine” balloon.

One of my favorite balloons include the space shuttle of Axe Philippines which came complete with an Axe Apollo astronaut and a group of space girls. They flew in the hot air balloon straight from the US, including the main pilot and some staff just for this festival.

Other interesting hot air balloons were a firetruck and the one from Flying V. Other awesome activities that day included opening ceremonies’ Philippine flag drop where three sky divers with the Philippine flag went skydiving as the national anthem was being played.

But I think the crowd favorite was the Breitling Jet Team who showcased an amazing aerobatic exhibition of jet stunts.

One drawback of this year’s festivities though, is that all areas were on soil grounds resulting to a very dusty experience for most, even along the food booths section. It would have been a great family or picnic activity but I wouldn’t recommend it for small children this year as the soil and dust can easily irritate their eyes and lungs, to say the least. Hopefully they can change back to last year’s venue which was at least partially asphalted (only the VIP balloon grounds and parking was on soil).

Nonetheless, If you get tired of the dust or want to cool off in the afternoon, there is always the SM City Clark nearby. They also have related activities going on for the weekend. 🙂

You have three more chances including one tonight and two more tomorrow to witness the Philippine International Hot Air Balloon Festival on their last day. Kudos to the organizers and see you again next year! 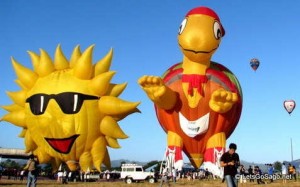